Google’s Algorithm Updates: What Are We Seeing? Over the last few weeks, Google’s algorithm updates have been coming thick and fast.

While the impact on your rankings are monitored, it may be difficult to see the wood for the trees with so many changes in such a short space of time.

So, what’s happening in the world of Google and what are the effects we’re seeing?

Google rolls out a core update every three to six months, the most recent of which was in June.

Like all broad core updates, this was global and was not specific to any region, language or category of website.

A ten-day rollout, the Google June 2021 core update started on June 2 and finished rolling out on June 12. So far, we’ve not seen a huge impact other than some initial positive movements. We’ll continue monitoring how the update is affecting our clients’ rankings over the coming months. 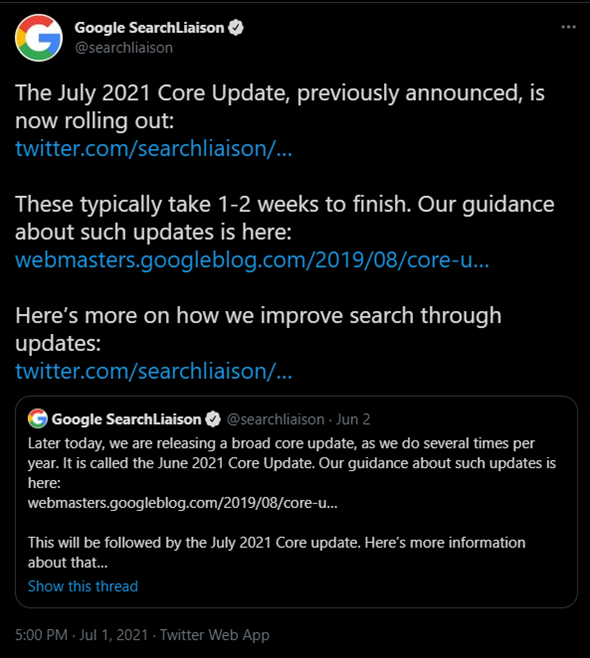 The second part of the update began rolling out last week on July 2. This is the first time Google has ever rolled out one of their core updates in two parts.

So why has Google pushed out two different core updates within the space of a month? The search engine giant reportedly stated that some of their planned improvements for the June 2021 update were not ready to be released.

Google decided to push ahead with the parts that were ready in June before rolling out the rest of the update in July.

Could this two-part rollout mean something different to rankings? Google shared a snippet of insight into what they expect could occur:

“Of course, any core update can produce drops or gains for some content. Because of the two-part nature of this release, it’s possible a very small slice of content might see changes in June that reverse in July.”

We would usually have expected to see more movement than what has been experienced. As such, we’re expecting a greater shift as the second part of the update finishes rolling out this month.

Not only are we experiencing a second core update this month, but Google also began rolling out the page experience update on June 16 and the two are not to be confused.

As a quick recap, here’s what’s currently rolling out as part of the CWV update:

If you want to find out more about what to expect from the CWV update, take a read of our blog: Core Web Vitals Update: What Does It Mean And How Will It Affect You?

Google has confirmed that on June 23 it released a search spam update which completed in one day. The search engine didn’t say exactly what type of spam it targeted with this update but simply linked to its general spam prevention notices.

Although it’s unclear what type of spam this update specifically targeted, it doesn’t seem to have had a big impact. However, Danny Sullivan did share that it was a global update that currently covers web page and image results but does not impact local results. It’s also worth noting that a second spam update followed within the next week on June 28.

As always, we closely monitor the impacts of Google’s updates allowing us to proactively react and keep our clients up to date on SEO best practice. If you want more information on the impacts that Google’s updates may have on your rankings and how to mitigate the risks of a drop in visibility, get in touch with our SEO experts.